Very Rev. Gheevarghis Aroopala Corepiscopa was born on November 26, 1940 to Abraham and Sara Aroopala, a devout Orthodox Christian family in Ooramana , India (near Kadamattom, in Ernakulam District in Kerala. ) He was baptized at the St. John's Orthodox Church in Pampakuda, Kerala.

From his early childhood, Gheevarghis showed great appreciation and interest in the study of the bible and liturgy of the Church.. Because of his growing desire to serve God as a Priest, he joined the Orthodox Theological Seminary in Kottayam in 1959 after completing his schooling at the Pampakuda MTM High School. He was ordained as a deacon by His Grace Augen Mar Themotheos, Metropolitan of the Kandanadu Diocese, at St. Peter's and St. Paul's Orthodox Church, Kolencherry, on May 29th, 1963. In 1964, Gheevarghis graduated from the seminary and received the G.S.T (Graduate in Sacred Theology).

Upon completion of his studies, Gheevarghis was appointed as the Private Secretary to His Holiness Moran Mar Baselios Augen I, the Catholicos of the East and Malankara Metropolitan. He served the Catholicos from 1964 to 1967. During this period, he gained extensive knowledge and experience in church administration and liturgical services. Deacon Gheevarghis accompanied His Holiness, the Catholicos, to international meetings with world leaders such as the Head of the Catholic Church, Pope Paul VI; the Patriarch of Antioch, His Holiness Ignatius Yakub III; the Prime Minister of India, Smt. Indira Gandhi; the President of India, Dr. S. Radhakrishnan; and, the Patriarch of Romania, His Holiness Justinian.

In 1967, Deacon Gheevarghis joined the Bucharest University in Romania with a scholarship from the World Council of Churches (WCC). Here he obtained the Bachelor of Divinity (B.D.) degree and completed a Doctor of Theology (D.Th.) degree in 1971. During his stay in Romania, Deacon Gheevarghis was also recognized by the Patriarch of Romania, His Holiness Justinian, with special gifts of personal appreciation.

In 1971, Deacon Gheevarghis joined the McCormick Theological Seminary in Chicago with a scholarship from the United Presbyterian Church. In 1973, he was awarded the Master of Science in Theology (S.T.M.) degree with a specialization in Historical Theology. In 1974, he obtained the Master of Theology (M.Th.) degree with a specialization in Pastoral Care Counseling and Psychology from the Chicago Theological Seminary. During this time, Deacon Gheevarghis helped organize the St. Thomas Indian Orthodox Church in Chicago and was elected as its first Secretary.

Upon completing his education in Chicago, Deacon Gheevarghis returned to India and married Molly Cheruvellil, the daughter of Kuriakose and Annamma Cheruvellil from Maradi, near Muvattupuzha in Kerala on September 1, 1974. On September 6th, 1974, he was ordained as a full deacon by His Grace Paulose Mar Philexinos, the Metropolitan of the Kandanadu Diocese, and His Grace Mathews Mar Coorilos, the Metropolitan of the Kollam Diocese. On September 7th, 1974, Deacon Gheevarghis was ordained as a priest by His Grace Paulose Mar Philexinos at the St. Thomas Cathedral in Muvattupzha.

On June 15th, 1988, Rev. Fr. Gheevarghis Aroopala was appointed as the Vicar of the St. Thomas Indian Orthodox Church in Houston, Texas. In 1992, the Church was able to purchase 12 acres of land in the neighborhood of Stafford , Texas and build an impressive Church and Auditorium facility. During the Silver Jubilee celebrations of the St. Thomas Church, as well as the Silver Jubilee of Rev. Fr. Gheevarghis's priesthood, His Holiness Moran Mar Baselios Marthoma Mathews II, the Malankara Metropolitan and Catholicos of the East, elevated Achen to the position of Corepiscopa on September 25, 1999.

Our beloved Very Rev. Gheevarghis Aroopala Corepiscopa, or "Aroopala Achen" as he is fondly called, currently resides in Stafford, Texas with Kochamma and their two daughters, Amy and Christy. Amy is married to Mohan Thomas and they have 1 daughter, Jasmin. Achen continues to lead the St. Thomas Indian Orthodox Church in Houston as the Vicar and President. Under his inspiring and fruitful leadership, the Church has truly flourished. Through Achen's guidance and continuous support, the parish has pioneered many of the progressive missions and activities that are now practiced throughout the American Diocese. We pray that Almighty God will continue to shower blessings on our beloved Achen and family and grant them the health and strength to lead us with their inherent faithfulness, gracefulness and humility that has been perfected in His service over the last 40 plus years.

Rev. Fr. Mammen Mathew was born on March 24, 1943 to Mr. Thomas Mammen and Aleyamma Pulikathara. After his High School in Ayroor he joined the Catholicate College and graduated in Physics and Mathematics in 1966. He then continued his studies for master's degree in English from the Govt. College in Ajmir, Rajasthan in 1969. He finished the teaching degree (B. Ed) in 1971, from Mumbai University. He worked with the Catholic Student Union in Ajmir, Rajasthan and at night he enjoyed teaching High School dropouts in Mumbai.

In 1973 he married Annamma from Naranganam and they moved to New York in 1974. There he studied and certified in Nuclear Medicine from New York. In 1976 he relocated to Houston and worked his way up to be the Director of the Nuclear Medicine Department of the BenTaub Hospital and retired from the service in 1996.

His aspiration for church work was alive still. He studied Clinical Pastoral Education in the Institute of Religion and started working as Chaplain in BenTaub Hospital. Meanwhile, he continued his studies in the St. Mary's Catholic Seminary in Houston and got his MA in Pastoral Theology.

He also served as the Director of Youth Organization, Director of Campus Ministry and Vice President of MGOCSM of the Southern Region of the American diocese till the formation of Southwest American Diocese. Father Mammen Mathew was the coordinator of the first Leadership Camp of the MGOCSM of America and took an active role in conducting the Leadership Camps at different parts of United States. Along with his Asst.Vicar role in St. Thomas Church, he was helping other parishes as relieving priest and in two churches as Vicars when there was a need.

Rev. Fr. Eldo Elias has been serving as an Assistant Vicar at St. Thomas Indian Orthodox Cathedral Houston since July, 2019.

Rev. Fr. Joel Mathew has been serving as an Assistant Vicar at St. Thomas Indian Orthodox Cathedral Houston since July 1, 2012.

Rev. Fr. Joel Mathew has been serving as an Assistant Vicar at St. Thomas Indian Orthodox Cathedral Houston since July 1, 2012. Fr. Joel is married to Mrs. Shini Mathew and they are both originally from Dallas, TX and members of St. Mary's Orthodox Church, Farmers Branch. Fr. Joel is the son of Thomas & Gracykutty Mathew of Valliazhiathu Family from Kattanam, Kerala. Their home parish in India is St. Stephen's Orthodox Valiyapally in Kattanam. Fr. Joel has one brother and sister-in-law, John and Libby Mathew who also reside in Dallas.

Fr. Joel was ordained as a Subdeacon on May 21, 2011, as a Deacon on June 9, 2012, and as Priest on June 16, 2012 by His Grace Alexios Mar Eusebius, Metropolitan of the Diocese of South-West America. The ordinations took place at Fr. Joel's home parish of St. Mary's Malankara Orthodox Church, Farmers Branch, TX.

Prior to joining seminary, Fr. Joel attended Southern Methodist University in Dallas, Texas where he received his Bachelors & Masters degrees with a concentration in accounting & economics. Fr. Joel is a licensed Certified Public Accountant in the State of Texas, and he worked for Ernst & Young, LLP before deciding to attend seminary in 2008.

Fr. Joel has served the Church in many capacities including serving on as the Diocese MGOCSM Secretary for the of South-West American Diocese, the National Council of MGOCSM North America as the General Treasurer and as a representative for the Dallas/Oklahoma area.

.Rev. Fr. Joel Mathew has been serving as an Assistant Vicar at St. Thomas Indian Orthodox Cathedral Houston since July 1, 2012. 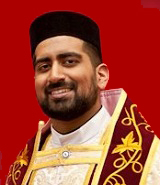